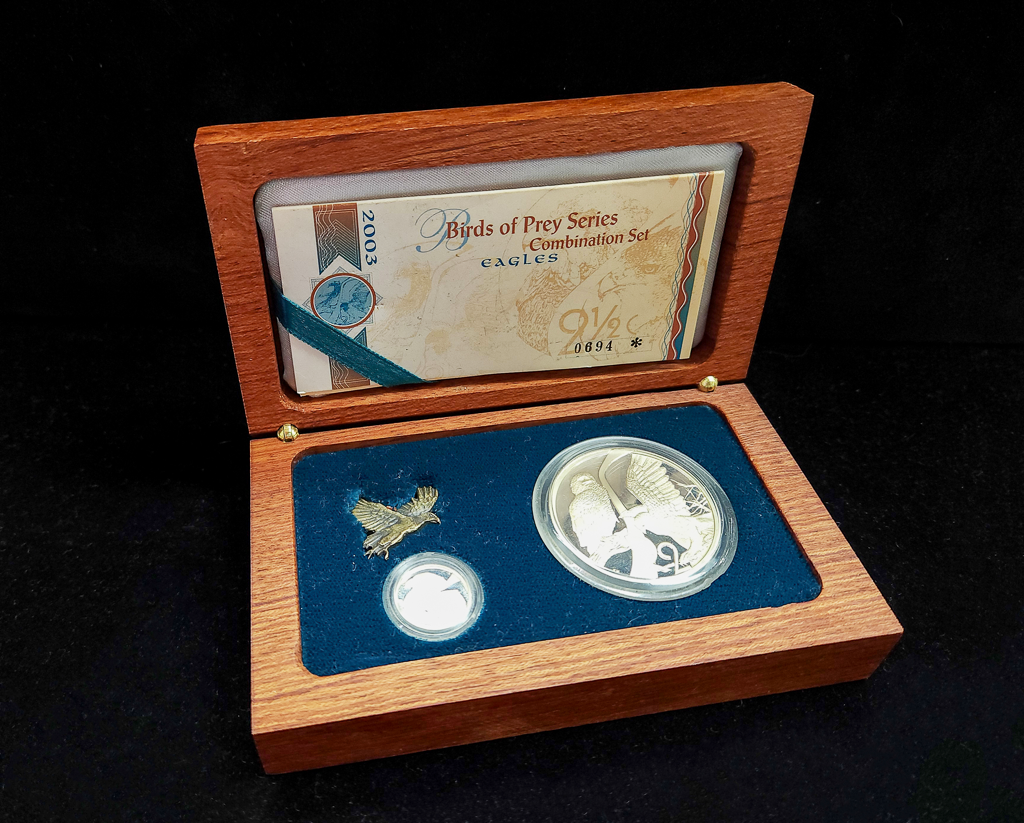 Birds of Prey Series: The Eagle
A new series is depicted on the 2003 R2 crown and 2 1/2 c tickey sterling silver coins called birds of prey.

The Birds of Prey series follows the Marine Life series, which was first introduced in 1997 with the Knysna Seahorse.
In 1998 the Jackass Penguin was featured, followed by the Great White Shark in 1999, the Common Octopus in 2000 and the Dolphins in 2001. The fast marine animals to be depicted were the Whales in 2002.

The first theme to feature on the 2003 Birds of Prey coins is the Eagle. Both the Martial Eagle (Polemaetus bellicosus)and the Bateleur Eagle Terathopius ecaudatus were chosen to represent the majestic African eagles.

On the left-hand side o the R2 crown size coin, a Bateleur Eagle, perched on a branch, surveys the African Savannah.

As these eagles mature, their light brown white-flecked neck plumage turns a dark purple-black and their greenish-blue faces and legs become scarlet-red. Another feature of this exceptionally beautiful eagle is its pointed wings which allows it to glide fast and far in search of food. As it glides, it cants from side to side — a motion unique among African eagles.

It was this peculiar flight pattern that earned the bird its name — “bateleur” which is a French word meaning “acrobat”.

Separated from the Bateleur Eagle by a flowing fine and the word “R2”, the Martial Eagle lands, wings out-stretched onto a thorn tree branch. The Martial Eagle is the largest and most powerful eagle in Africa, quite capable of attacking and killing even small antelope. They do most of their hunting from the air using their phenomenal eyesight to locate even the smallest and most expertly camouflaged creature from great heights.

The Maftial Eagle with its black breast, brown head and wings and black spotting on the white underparts, is a magnificent sight to behold.

On the 2 1/2 c Tickey, portraits of a young Bateleur Eagle and Maftial Eagle are featured. To maintain continuity on the two coin designs these birds are again separated by a flowing line and the word “2 1/2 c”. The slow reproductive rate of these two species of eagles makes them vulnerable to human activity and interference. There are various conservation groups trying to re-establish and protect these majestic birds. The South African Mint is proud to portray the magnificence and beauty of the African eagles on these legal tender coins.