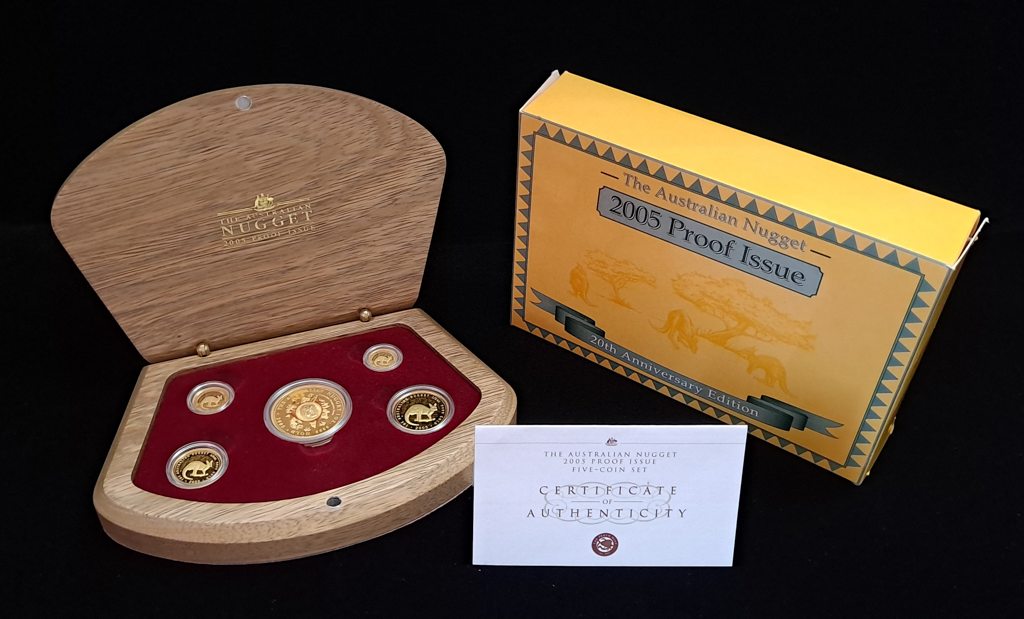 This certificate accompanies a Five-Coin Set, containing an individual 1oz, 1/2oz, 1/4oz, 1/10 oz and 1/20oz coin from the 2005 Proof Issue of the Australian Nugget Gold Coin Series, minted and inspected by The Perth Mint. The coins are legal tender under the Australian Currency Act 1965 and are made from 99.99% pure gold.

Now in their 20th year, Proof Nuggets were introduced in 1986 when they depicted natural nugget designs. In 1989 the theme was changed to feature kangaroos.
The 2005 design on the coins of 1/2 oz and smaller depicts a young kangaroo against a natural bush background, which is portrayed in color. The Perth Mint’s traditional ‘P’ mintmark also appears on the reverse.

The 1oz coin, Golden Reward, is the final design in the five-year Australian Prospector companion series featuring designs based on Australia’s gold prospecting heritage. It celebrates the 2,284 oz Welcome Stranger nugget, the largest natural nugget ever found, which was discovered in Australia in 1869. The image of the nugget is surrounded by representations of early Australian prospectors and prospecting techniques on a colored landscape.

The Perth Mint’s traditional ‘P’ mintmark appears on the reverse designs of all 2005 Proof Nuggets, while the obverse of each coin depicts the Ian Rank-Broadley effigy of Her Majesty Queen Elizabeth II and the monetary denomination.