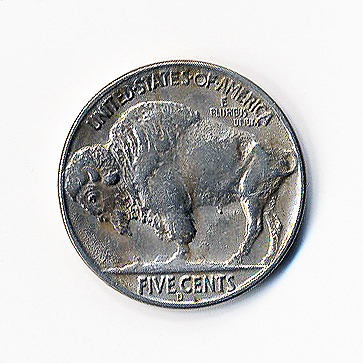 The ever-popular and eagerly sought 3-Legged Buffalo nickel came about as a result of clashing that occurred when the obverse and reverse dies struck each other in the absence of an intervening planchet. Such processing troubles are common in most mints, and these occur when the planchet feeder tube gets clogged or simply runs out of planchets to feed into the press. When noticed by mint employees, clash marks are removed by filing down the fields ever so slightly. In the case of this famous issue, however, die filing also removed the bison’s right foreleg.

Traces of unrelated die rust or spalling (die wear) are also noted on this reverse: along the bison’s back below the Latin motto E PLURIBUS UNUM, on its rear legs, and in the field below its belly.

These features are always present on genuine examples.

Neck of the Indian

The top of the neck on the Indian will look really bumpy and mossy. It won’t be smooth like the rest of the neck.

Look at where the leg is supposed to be and look for tool marks like a dremel, or file. The hoof of the buffalo will still be there in a genuine coin.

The body of a genuine 3 legged buffalo nickel will be significantly smaller than a regular buffalo nickel. One of the funnier ways to spot a genuine nickel (Usually in BU or better) the buffalo looks like it’s urinating.

The two back legs of the buffalo will look very bumpy and rigid like the top of the Indians neck.

The P in Pluribus and U in Unum can’t be touching the buffalo.