History of Gold as a Currency | Rocky Mountain Coin 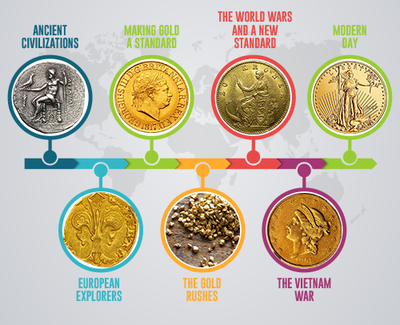 The History of Gold as a Currency

Numerous individuals and institutions agree on gold as valuable. Its physical properties allow reserves and private holders to store the precious metal in any form. However, gold’s history has solidified its significance. If you need reasons to add gold to your assets, use this historical outlook on gold’s development in historical civilizations and its current status in the modern economy.

Numerous early civilizations discovered the benefits of gold and adopted its usage in their economies as the primary currency. The first commercial use of gold goes back to ancient Asia Minor, where the Lydians used it to create coins.

The first gold coins were minted in Lydia around 560 BCE. China also adopted little gold squares as a recognized token of exchange. In 50 BCE, Romans introduced an imperial coin system called the aureus.

The 11th century saw a shift in the international community’s view of gold. Major civilizations in the Mediterranean region that exist today firmly adopted gold as a primary currency. Egypt became a wealthy nation due to its extensive gold reserves in Nubia.

Venice created the gold ducat, a prevalent currency that still retains its value in the modern world. In the 18th century, gold was found in Brazil. It then became the largest gold producer and cemented its position as the primary gold source for international trade, with over two-thirds of the gold coming from Brazil.

The gold standard is a monetary system in which the standard economic unit of account is based on a fixed quantity of gold. The gold standard first started in Britain in the 19th century. The British government ties the value of a pound to gold in the 1800s. The United States followed with an unofficial gold standard after eliminating silver as a reserve currency.

The gold bullion standard in Britain backed the pound with a redeemable 400-pound gold bullion. Both the US and Great Britain standardized gold and backed its usage, which stabilized currencies in the international market.

In the modern international economy, gold is primarily a form of investment and store of value rather than in day-to-day commerce. The United States holds gold as a reserve asset, and the US Mint manages its official holdings. The Mint also produces circulating coinage for the country. In addition to these official holdings, investors and citizens privately hold a large amount of gold.

You can begin your gold collection today or even exchange the gold you have today with a willing buyer. Visit us at Rocky Mountain Coin to start your gold journey. We deal with precious metals, rare coins, and coin grading, primarily for American-based coins. We will be happy to go over any questions or concerns you have. Let us know what you want for your gold collection.