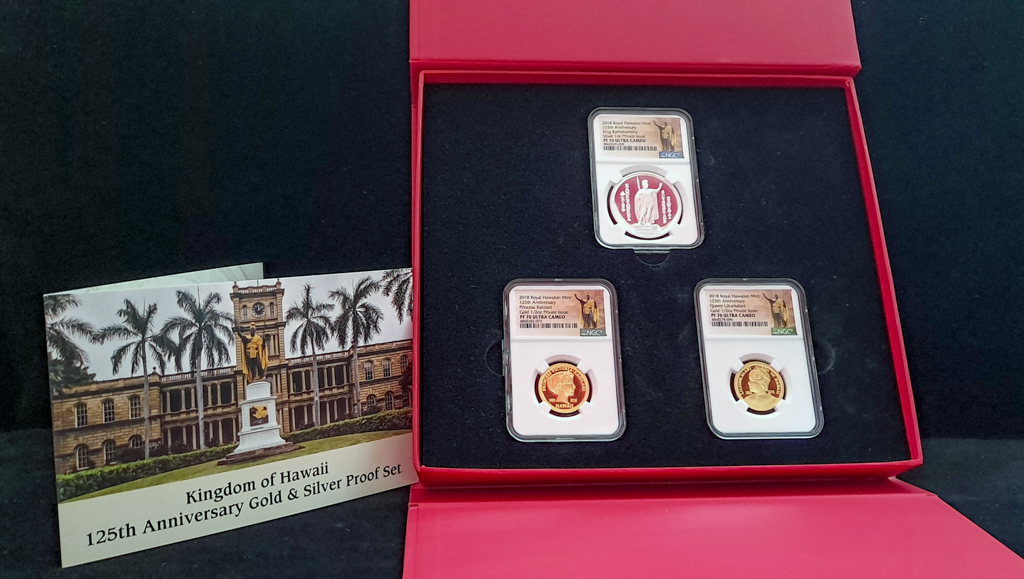 Includes a silver 1oz. King Kamehameha round, a gold 1/2oz. Queen Liliuokalani round, and a gold 1/2oz. Princess Kaiulani round. From a mintage of only 500 sets. With certificate of authenticity from the Royal Hawaiian Mint.

Long before Hawaii became the State of Hawaii, the Hawaiian Islands were a sovereign Royal Kingdom. During much of Hawaiian history, the various Hawaiian chiefs were in a near-constant struggle for power. This struggle ended when Kamehameha I conquered all of the islands, united the chiefdoms and created a dynasty that ruled until 1872, when King Kamehameha V passed without naming an heir.

In 1874, David Kamananakapu Kalakaua was elected by the Legislative Assembly to be King of Hawaii and ruled until his passing in 1891. His sister Kamakaeha Liliuokalani was elected Queen and became the last Hawaiian sovereign to rule the Kingdom of Hawaii.

In 1893, the Kingdom of Hawaii was overthrown with the help of the United States military. Hawaii thus became a U.S. territory, which was more favorable to the American businesses that had become disgruntled with
the sovereign Hawaiian government.

The historic Royal Hawaiians commemorated in this set of three proofs include:

King Kamehameha I
Kamehameha I, also revered as “Kamehameha the Great;’ was the first Hawaiian to unite the Hawaiian Islands. A gold and bronze statue of King Kamehameha is prominently featured in front of the Hawaii State Supreme Courthouse across King Street from Iolani Palace in Honolulu. The image from that statue is depicted on the One Ounce Silver Kamehameha Proof. The reverse features a traditional Hawaiian outrigger canoe and the official Hawaiian Motto: Ua Mau ke Ea o ka ‘Aina i ka Pono: “The life of the land is perpetuated in righteousness”.

Princess Kaiulani
Queen Liliuokalani named Princess Victoria Kaiulani heir apparent. Educated abroad and rarely in Hawaii, her grace was said to be pure Aloha as she spread joy throughout the Kingdom. She traveled throughout the United States as a relentless advocate for the restoration of the Hawaiian monarchy. Eloquent and charming, she was nevertheless denied the throne for which she was groomed. She is featured on the obverse with the Hawaiian Royal Crown on the reverse