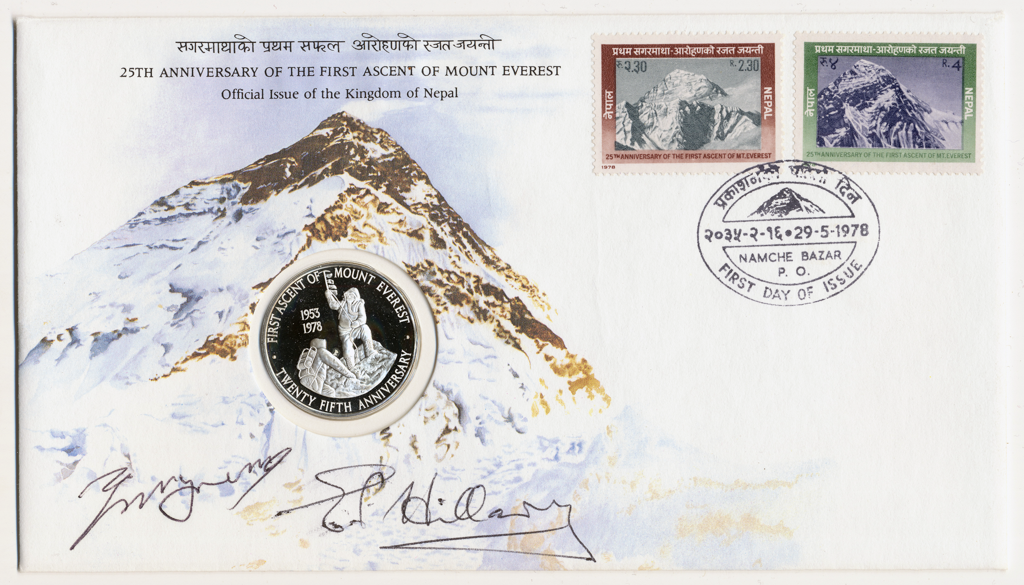 Hand-signed by Sir Edmund Hillary and Sir Tenzing Norgay, the first men to reach the summit, and bears the first day of issue cancellation of the base camp postal station in Nepal. The sterling silver commemorative medal depicts the climbers at the very moment they reached the summit of the world’s highest mountain.

On May 29, 1953 at 11:30 a.m. Edmund Hillary and Tenzing Norgay reached the top of Mount Everest in Nepal, the world’s highest mountain peak. While the world waited to learn whether or not the two courageous climbers had reached the summit, Hillary photographed the view from the top, as Tenzing held up his ice ax and proudly displayed the flags of the United Nations, Great Britain, Nepal and India. Then as Hillary buried a crucifix in the snow, Tenzing buried his offerings to the Buddhist gods-a pencil his daughter had given him and some candy. It would be three days before the world would receive the joyous news that man had-at long last-scaled mighty Everest.

There was no point in lingering. These two intrepid climbers had reached the top. The work at hand was now the descent. At 2:00 p.m. they reached their final bivouac; late the same afternoon they reached their lower camp and joined their support party. The adventure had taken only a day for completion. Yet, both men had spent almost a lifetime in preparation. And added to their preparation was the all-out effort of a backup team of 13 expedition members, three of them scientists, with support from almost 400 Sherpa porters and guides.
Before Hillary and Tenzing conquered the peak, the British had mounted an expedition headed by Eric Shipton. It was Shipton who in 1951 mapped their route to the summit of the 29 ,028-foot peak. Hillary’s expedition was sponsored by the Joint Himalayan Committee of the Royal Geographical Society and the Alpine Club.

This first successful ascent was made by establishing a chain of eight camps above a base camp, each higher than the one before. The camps were provisioned at the cost of immense amounts of hard, drudging labor under the most dangerous conditions.

For his successful climb of Everest New Zealand ­born Edmund Hillary, who was then 33, was knighted. John Hunt, the British army colonel who organized and led the expedition also was knighted. Tenzing Norgay, the 39-year-old Sherpa guide, was given Britain’s highest civilian award; the George Medal.