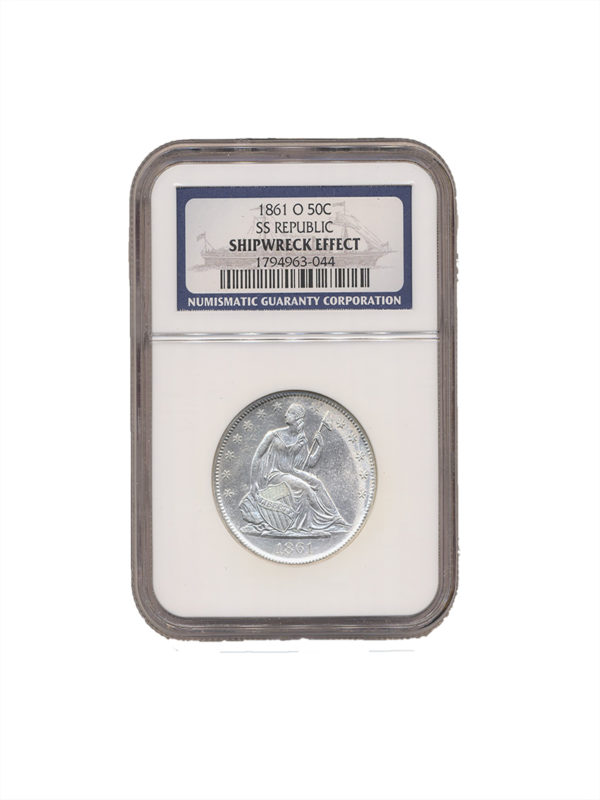 Civil War Era 1861-O SS Republic Shipwreck Liberty Seated Half Dollar. Civil War Era sea salvaged United States seated half dollar from the Shipwreck SS Republic (see pictured certificate). The SS Republic was lost in a hurricane in 1865 100 miles east of Georgia. In presentation case with Odyssey Exploration Video. Uncirculated details! Excellent Treasure Ship & Historic Memento. At the outbreak of the Civil War the SS Republic was trapped in port at New Orleans, Louisiana, and was seized for use as a Confederate blockade runner as the CSS Tennessee in 1861, although she was never able to escape blockade of the New Orleans harbor.

After the Union capture of New Orleans, the ship was put into armed Union service, including as the flagship of United States Navy Admiral David G. Farragut for the conclusion of the Mississippi Campaign. As USS Tennessee, she was not only a fast and effective blockade ship in the West Gulf Squadron, but also a powerful gunship used to bombard Ft.Morgan during the Battle of Mobile Bay.

The Republic left New York on October 18, 1865, bound for New Orleans. According to her captain, she was carrying passengers and a cargo of $400,000 in coins, mostly in gold $10 and $20 pieces, intended for use as hard currency after the Civil War. The city of New Orleans, captured largely intact by the Union in 1862, had been the southern hub of Federal war efforts and was a thriving, busy city – but due to war, “hard money” (or gold and silver coin) was in very short supply. On the fifth day of her voyage, a hurricane off the coast of Georgia proved too strong for the ship.

By evening, her hull was leaking so badly that the fire in the boiler was extinguished, and she stalled in heavy seas, taking on water faster than her crew and passengers could bail her. At 4 pm on October 25, 1865, she sank. The passengers and crew escaped in four lifeboats and a makeshift raft, but 40-foot seas throughout the night made keeping them afloat a serious challenge. It was not until two days later, on October 27 that the survivors, now desperate with thirst, were found by the sailing ship Horace Beals. On October 29, the steamer General Hooker had been sent to look for the Republic, and rendezvoused with Horace Beals. The passengers were transferred and taken to Charleston. Most of the passengers and crew survived, although several were lost on the raft before they could be rescued. All the coins were lost at sea.