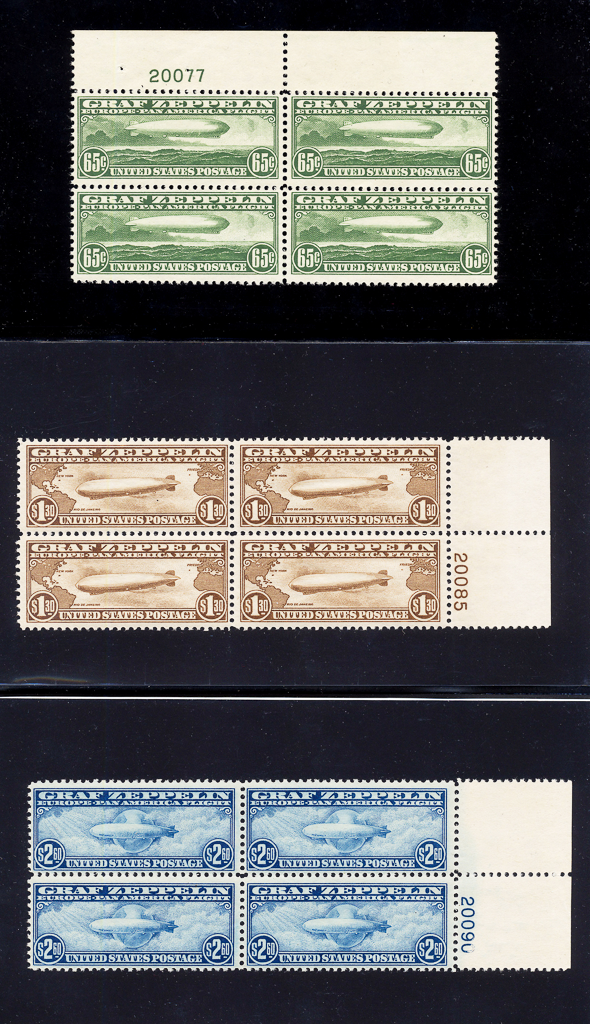 In 1930, a new issue of airmail stamps was announced. These three stamps were to be used exclusively on mail carried via Graf Zeppelin on its European – Pan American flights.

On April 19, 1930, the USPO issued three stamps, each with a different design and for a particular amount. The first, a 65-cent stamp, was green, and showed the Graf cruising eastward above the sea. This stamp would get a postcard over the ocean once, from the U.S. or Brazil to Spain or Germany. The second, a $1.30 stamp, was brown, and featured the zeppelin heading west over a cropped map of the world labeled with the tour’s three main cities (although New York, here, stands in for New Jersey). That one would get a letter across the sea.

Many philatelists of the time turned their back on these issues, citing that the Postal Service was charging too much, and trying to drum up demand by destroying unsold issues. While highly publicized and controversial at the time, in the years since their issue Graf Zeppelin Airmails have become highly sought by collectors. In those days many thought that Zeppelins would become the future of transatlantic travel. Following the tragic explosion aboard the Hindenburg seven years later these giant dirigibles would become the “Titanic” of the skies.

The Post Office eventually destroyed the remainder of the stamps, making collectors, who quickly accused them of creating artificial scarcity, even angrier.