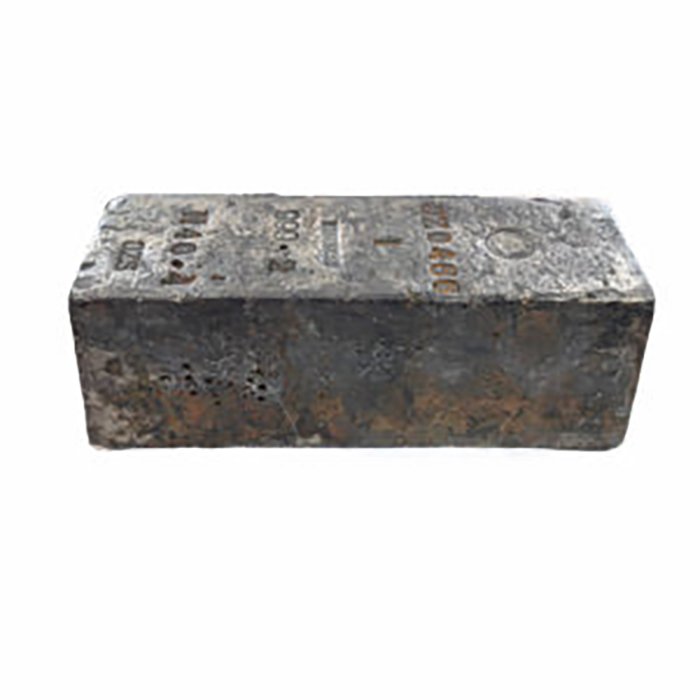 1140.4 oz 999 Silver Shipwreck Bar SS Gairsoppa HM Mint Bombay. The SS Gairsoppa was a steel-hulled British cargo steamship under the service of the British India Steam Navigation Company Ltd. of London, was enlisted by the United Kingdom Ministry of War Transport in 1940 to transport vital military supplies during World War II. In December 1940, the Gairsoppa set sail on a mission to transport 7,000 tons of cargo from Calcutta, India to Liverpool, UK. It joined convoy SL64 in Freetown, Sierra Leone and the ships, with no military escort, made their way through the dangerous waters of the Atlantic. Safely reaching the northern latitudes but running short on fuel the Gairsoppa was forced to break away from the protection of the convoy in order to sail to the port in Galway, Ireland. On February 17, 1941, battling high winds and ocean swells, sailing alone and at low speed, the Gairsoppa was spotted by the enemy. U-boat U-101 submerged and fired four torpedoes–one hitting its mark sending the Gairsoppa bow first into the icy waters of the North Atlantic Ocean. With its radio antenna destroyed, it was unable to even send a distress call. Historical documents confirm nearly 100 metric tons of silver was lost when the ship sank. The UK War Risk insurance program insured the high-value cargo, giving the UK legal rights to the precious silver resting on the ocean floor. In 2010, the UK Department for Transport awarded Odyssey Marine Exploration, a leader in deep-ocean exploration, the exclusive salvage contract for the cargo. After extensive research to determine the highest probability search area, Odyssey located the Gairsoppa about three miles deep, 300 miles southwest of Galway, Ireland. Recovery operations commenced in 2012, and Odyssey announced the recovery of the first silver bars on July 18, 2012. During the next two years, Odyssey recovered 2,792 silver ingots from the SS Gairsoppa which most where of 91.7% fine silver in purity. This bar is a whopping 1140.4 troy oz of pure .999 fine silver and is one of only 462 pure silver  bars recovered from the SS Gairsoppa. Many of the pure silver bars were melted down to make one and ten ounce commemorative bars and medallions. The bar is stamped with ingot identification number JZ466, and its weight and fineness, which directly ties it to the historical 1941 War Risk document.

Filters
Back to Top